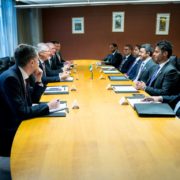 US Ambassador to UAE talks to Javed Malik