Clinton out, Kerry in as US secretary of State 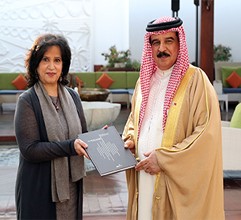 PM meets CEO of 'Women in the World' Summit