FM meets with Minister of Trade of New Zealand 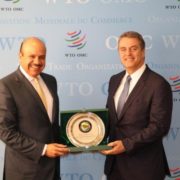