Ferguson to Retire from Manchester United 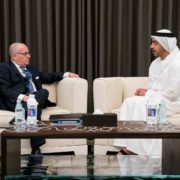 Egypt’s Sisi to run for Presidency